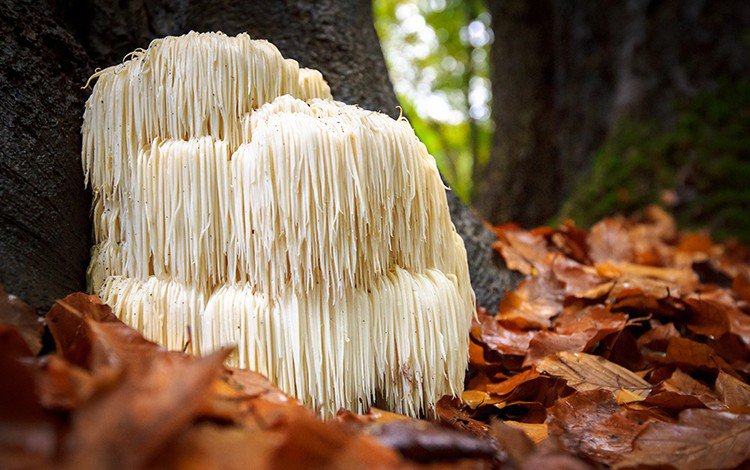 What Are The Benefits Of Lion’s Mane Mushrooms?

The lion’s mane mushroom has a distinctive appearance and an even more distinctive reputation in functional medicine. It has the potential to help improve a wide variety of health issues, including anxiety and depression, inflammation, diabetes, and even cancer.

In this article, we discuss the history and known benefits of lion’s mane mushrooms, as well as if there are side effects that you should be aware of.

The lion’s mane mushroom, or Hericium erinaceus, grows in clumps on the trunks of dead hardwood trees in North America, Europe, and Asia. Like many other fungi, it is a longtime staple in traditional Chinese medicine.

Lion’s mane earned its peculiar name from its appearance. Its shape is bulbous and colored white, and it’s covered with white spines which give it its hairy, mane-like look.

Scientific research has unearthed many potential health benefits of consuming lion’s mane mushrooms by themselves, in supplement form, or in a beverage such as functional mushroom coffee.

Below are 10 known benefits of lion’s mane mushrooms.

Lion’s mane mushrooms contain antioxidants, which are known to fight inflammation and free radicals. Free radicals damage cells in the body and can cause cancer. Inflammation, meanwhile, can lead to the development of, or cause further complications for people with autoimmune diseases, cancers, and diabetes.

Reducing inflammation in the body by consuming lion’s mane can help support your immune system and make it stronger. Furthermore, a study showed that the guts in mice produced more immunity-boosting bacteria after the mice were administered with a protein present in lion’s mane mushrooms.

3. mAY Reduce Anxiety And Depression

At least three research studies have shown that consuming lion’s mane mushrooms reduce anxiety and depression, including a small 2010 study conducted in Japan on a group of women. The women in the study who took lion’s mane mushrooms felt less irritated and anxious at the end of 6 weeks than the women who took the placebo.

Various studies, most of them on mice but at least one on humans, indicated that consuming lion’s mane mushrooms may improve cognitive function. It could also have the potential to prevent cognitive health diseases such as Alzheimer’s and Parkinson’s.

One study on obese rats, published in 2013, showed that lion’s mane mushrooms in combination with capillary wormwood may help lower cholesterol. While there are no published studies on humans for this benefit, it could be well worth trying for individuals with heart health issues.

6. MAY Prevent And Treat Cancer

The antioxidants that lion’s mane mushrooms contain make them a potential preventative as well as symptomatic treatment of cancer.

Two separate studies on diabetic rats showed that when the rats consumed lion’s mane mushrooms, their blood sugar levels were lowered. In the study from 2015, the rats also displayed more antioxidant activity and a reduction in nerve pain.

Lion’s mane’s anti-inflammatory and antioxidative properties have a positive effect on gut health. In addition, one report on a study of mice even showed that lion’s mane can help protect against stomach ulcers.

Lion’s mane mushrooms applied topically to a wound may help it heal faster, according to one study on rats.

Consuming lion’s mane mushrooms may improve nerve cell regeneration, according to the findings of a 2011 study and another in 2015.

There are no known adverse side effects to taking lion’s mane. But, according to Verywell Mind, it could pose a potential problem for people with asthma or allergies.

With that in mind, it’s a good idea to consult your doctor before taking lion’s mane mushrooms if you have those or any other health conditions.

How To Consume Lion’s Mane Mushrooms

If you decide to include lion’s mane in your diet, you can cook them and eat them on their own, take them as a supplement, or brew it in your functional coffee. Their unique flavor, reminiscent of crab or lobster to some people, will add a fun spin to your morning cup of Joe.

*These statements have not been evaluated by the Food and Drug Administration. Functional mushroom products are not intended to diagnose, treat, cure or prevent any disease.
Share post: